What is the best way to remove cat urine?

This article explains results from testing over 100 ways to remove cat urine in a controlled testing environment. It is a brief summary of the publication “Cat Urine Odor Neutralization Study: A Comparison of Commercial and Natural Solutions” (by HIT Laboratories, 2017)

Why this cat urine study is important

The internet is saturated with suggestions for removing cat urine. While Google recommends over 10 million results for “how to remove cat urine”, few of those results present any good evidence, comparisons, or test results to support the claims for one urine removing product or formula being better than any others.

If you want to safely neutralize cat urine smell, we recommend: 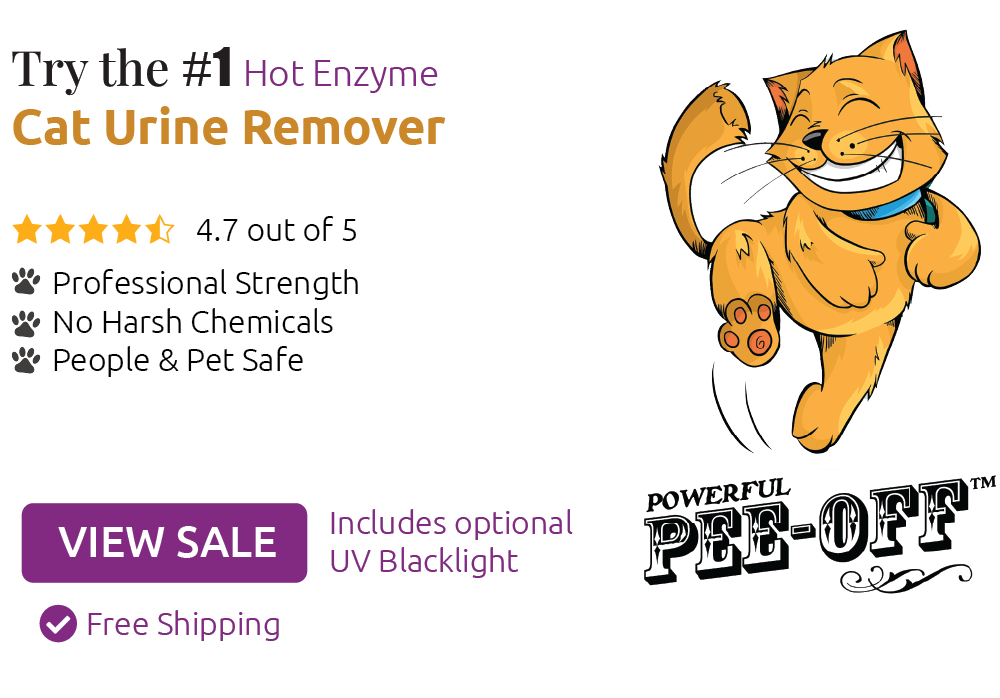 Odor ratings were then normalized to the control rating (water treatment only), such that a “1x” rating is equivalent to no odor reduction. Brand name have been redacted, with the exception of Pee-Off. 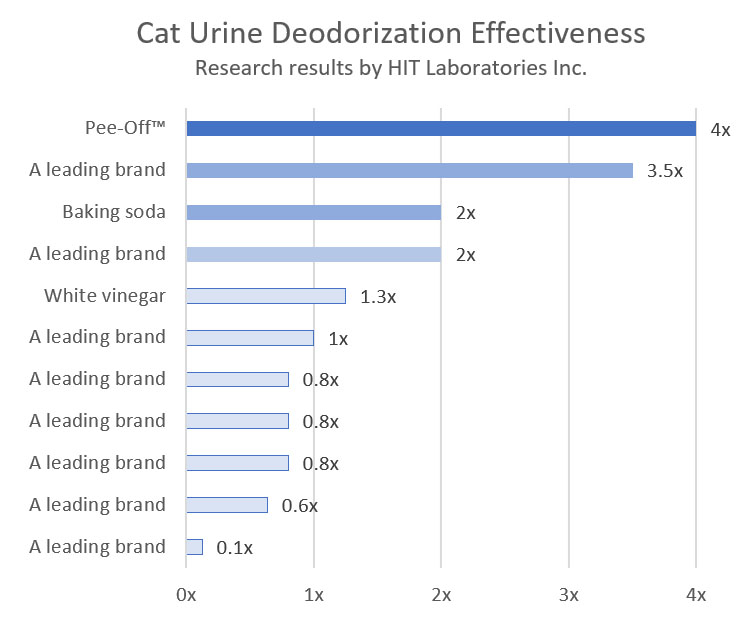 It is commonly known that the urine of domestic cats develops a strongly disagreeable odor after several days, and that the source of the odor is difficult to remove, especially on soft or porous surfaces.

Odor is primarily caused by the metabolic decomposition of urea by bacteria and other mechanisms, and by the presence of other organic compounds (Schwarcz, 2012).

Cleaning agents that can effectively reduce odor by the altering the urea molecule, denaturing the volatile organics, or inhibiting bacteria growth may also damage the fibers and dyes of the common household materials that require cleaning.

The purpose of this study is to compare the odor-neutralizing efficacy of several commercially-available cleaners with common “natural” or “home remedy” solutions. The test conditions simulate a cat urinating on carpet with subsequent cleaning, but without first removing excess urine (such as by blotting with towels), and with only a single application of the solution. This procedure was chosen as a “worst-case” scenario, when urine penetrates deeply into soft surfaces that cannot be fully blotted, rinsed or otherwise treated, such as mattresses, couches, and deep carpet.

350 ml of urine was collected from two healthy male cats over the period of 7 days using hydrophobic litter box sand, and refrigerated at 5 C until use 7 days after the collection period.

Common household carpeting (nylon, light grey color) was cut into 21 sample patches 1.5 inches square. The urine was removed from refrigeration until it reached ambient temperature (approx. 22 C), and 5 ml was added to the center of each patch using a syringe. Urine was gently massaged into the sample until fully absorbed.

Patches were randomly assigned an alphabetic identifier. Where not otherwise specified below, 10 ml of solution was applied to the center of each patch without agitation.

Patches were stored flat and exposed freely to the air in a dark room, with ambient temperature and humidity ranging 19 – 22 C, 50 – 60%.

After 72 hours, the control patch (urine online) was graded as the worst smell. The least disagreeable patches (best odor neutralization) and corresponding grades resulted from hydrogen peroxide (0.2), bleach (0.5), and Pee-Off (0.6).

Of the tested solutions, several do not appear practical for general-purpose cat urine deodorization:

Schwarcz, J. (2012, November 18). Why does cat urine smell so bad and what can I do about it? Retrieved from McGill Office for Science and Society: http://blogs.mcgill.ca/oss/2012/11/18/why-does-cat-urine-smell-so-bad-and-what-can-i-do-about-it/